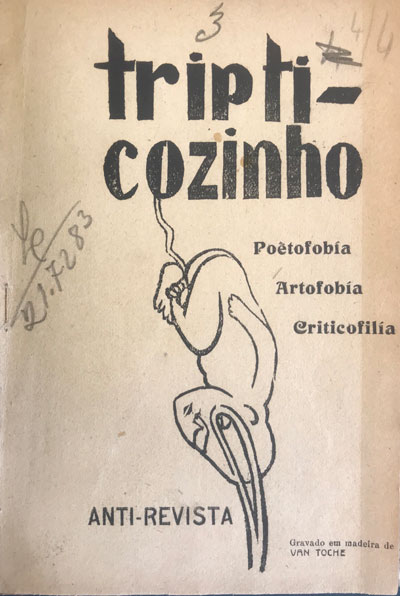 Tripticozinho was released during the month of April 1924, during the first issue of Tríptico. It is not known for certain what motivated this defamatory publication, but we do know that it was edited by Manuel Antunes Xavier Monteiro, a name that is unknown to us today. The truth is that, as the diminutive of the name eschatologically indicates, it is a unique number of satirical character, whose subtitle "Poetophobia, Artophobia, Criticophobia, Anti-Magazine" - thus dialogues directly with the Coimbra Tríptico.

Looking more closely at the publication, the criticism is always scathing, sometimes veiled, sometimes quite explicit. The first text is an example of this: here a "deliverance" is staged, the story of the birth of the magazine that intends to throw Tríptico into the public eye: Tripticozinho. It is the story of D. Tríptica (and if the criticism were not implied, a footnote clarifies: "It commonly goes by the name of the magazine The Triptych" [sic]), married to Dr. Intellectual, who gives birth with 'iron forceps' [sic] and Seara Nova, another one of the (repeatedly) targeted magazines, which had started three years earlier, in 1921. Basically, this is a kind of introductory text, or presentation of the issue, which is said to be unique right here: "The rogue daddy wanted to request a divorce, but well convinced by the assistants, he decided to continue with Dona Triptica. She fainted, and I believe there is no hope of issuing another number."

The text that follows in the alignment makes ironic remarks about the existence of poetry itself - "Poetry does not exist", enumerating and deconstructing several examples of how it is of no use. This text will rhyme with another one, in the end of the publication, in which it is intended to make a scathing "poetic sketch" from the times of medieval songbooks to the present time. After the attack on poetry, it's the turn to attack Art with a 'flat page' in an attempt to define what art is. In the text "Confissão" the target is the writer Virgínia Vitorino, perhaps the most recognized and published writer of the time. Other women are attacked later on "Judith Teixeira, Fernanda [de Castro?] Stichini, Amélia [Rey Colaço?] and men-"[António] Botto, Robles [Monteiro]", João de Castro Osório, among others. In a play, the "excerpt of a conversation between Apollo (marble) and Venus de Milo (the one with broken arms)" is staged, in a surrealist note (thus coeval in that year's to Breton manifesto). Also surreal is the page on orthographic issues, where imminent linguists and intellectuals are targeted, as well as the treatment given to pages relating to music, a section that is also very common in this type of publication.

The sparse illustrations, moreover, are caustic engravings, thus illustrating well the content of the texts. In short, Tripticozinho does not only intend to attack its counterpart and almost homonymous Triptico, it is an incisive reflection on the entire Portuguese cultural and literary society, pointing out without any scruples the names and institutions that should, in its view, be the target of criticism and complaint. At the same time, there is a self-reflection on the genre of periodical publication that is the artistic and literary magazine, making fun of its constituent parts. For this reason, it is a unique number of fundamental consultation for discerning the cultural panorama of the 1920s.