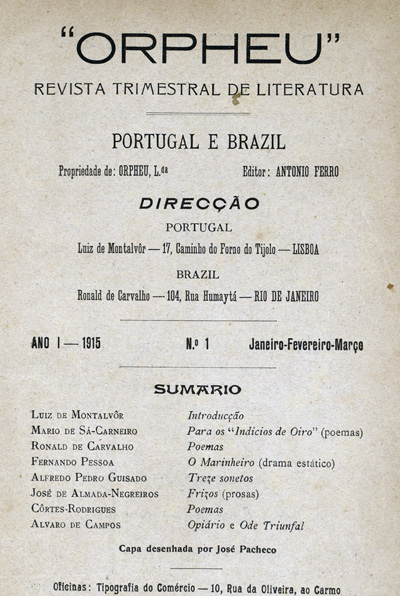 The literary magazine Orpheu made its debut on the Portuguese cultural scene on March 24, 1915, followed by a second issue on June 28. Initially planned as a quarterly publication, the magazine had a very short life, not managing to issue a third issue, mainly for financial reasons. Although Orpheu was the intellectual product of a group of practically unknown young poets and artists, its two numbers immediately provoked a literary scandal of significant proportions for a literary phenomenon, which dragged on for several months in the Portuguese press, ensuring its reputation beyond the time of publication. The scandal was mainly due to the formal and stylistic novelty in the literary and artistic domains introduced by the magazine, which caused great surprise in a cultural environment marked by the past. As early as the 27th of March, for example, O Mundo referred to it as “a sort of summary of the various modern currents in our literature”, which included “various collaboration of the most characteristic figures among the new ones”. The emphasis on modernity and novelty advocated by the magazine confirms its avant-garde nature in relation to the context in which it appears as the most representative publication of the first Portuguese modernist generation. As Fernando Cabral Martins notes, Orpheu “is a synecdoche of Modernism, a magazine-sign of the moment, whose name starts to identify a generation and a poetics”.[1] In fact, the magazine stars in the “activist moment” that Renato Poggioli identifies as a constituent of the nascent avant-garde movements,[2] but has a more lasting reach that includes both a generational dimension and a characteristic form of expression, as verified by the numerous contemporary magazines “ in the manner of Orpheu”. The classification that Fernando Pessoa gave it as “current” is equally suitable, capable of encompassing the transgenerational impact of that “cultural movement” (as Arnaldo Saraiva calls it)[3] in Portuguese letters, which would renew itself openly in experimentalist neo-vanguards from the 60s and 70s.

If, on the one hand, Orpheu's literary phenomenon anticipated modernity in a Lisbon that was still in an early stage of modernization, on the other, and in the international domain, it is worth noting the magazine's contemporaneity with some of the first European modernist expressions. This aspect is notorious considering that Orpheu's origins date back to 1912-1913, years in which some of its first collaborators – namely Fernando Pessoa, Mário de Sá-Carneiro, Alfredo Pedro Guisado, Armando Côrtes-Rodrigues and Almada Negreiros – came closer and the first two began to design it. Also noteworthy is the transnational aspect associated with the magazine, mainly due to the prolonged stays abroad of some of its collaborators, such as Sá-Carneiro, Santa-Rita Pintor and José Pacheco, who had significant artistic experiences in Paris before Orpheu. As a matter of fact, the magazine's inter-artistic content, which reflects these experiences, is compared to similar European phenomena by Almada Negreiros, for whom “it happened here (...) the same thing that erupted a little earlier in Paris: the meeting of letters and painting ”.[4] Likewise, Orpheu reflects a transatlantic encounter, resulting from the fusion of the magazine projects of Pessoa and Sá-Carneiro and from what had been shared by Ronald de Carvalho and Luís de Montalvor, which he had brought with him from Brazil, causing a first issue co-headquartered in Portugal and Brazil, with Luís de Montalvor and Ronald de Carvalho as directors, and featuring Portuguese and Brazilian collaboration in both issues.

Allied to the journal's transculturalism, its transdisciplinarity, characterized by a tendency to synthesize some of the most significant 'Isms' of the time. For Pessoa, the magazine's aesthetic mentor, as the "organ" of "Sensationism", Orpheu aims to be “uma arte-todas-as-artes” ("an art-all-the-arts") that "should end, alongside the subtlety of the Symbolists, and the speed of the Whitmanists, (I call this, to mark their origin, to cubists, futurists and other moderns (from our time?) dynamists...”.[5] The sentence is suspended in this fragment of “imaginary dialogic” that begins with the question “So, do you want to know what Orpheu is?”, but to these imported aesthetics that influenced the literary and artistic production of the Orphics, Pessoa adds, in addition to Sensationalism, Paulism and Intersectionism, which inspired his collaborations and those by other collaborators included in both numbers of the magazine.

Nonpartisan in political terms, Orpheu is presented by Pessoa as a platform for a cosmopolitan nationalism, as a counterpoint to the “radical provincialism” of Iberian literature,[6] and in an effort to distance himself from the nostalgic nationalism of the Portuguese “Renascença” and the traditionalist nationalism of Portuguese Integralism, its contemporaries. Therefore, in 1914 Pessoa and Sá-Carneiro thought the suitable title for the magazine would be “Europa”.[7] Steffen Dix suggests that “the famous paradox of cosmopolitan nationalism that Pessoa mentioned around this time” can best be understood in the context of the “intellectual climate during and just before 1914”, characterized by “a curious closeness between cosmopolitanism and nationalism”, reflecting thus the volatile condition experienced in pre-war Europe.[8] Later, the collaborators on Orpheu will call themselves “Portuguese who write for Europe”.[9] This objective corresponded not only to an intention to Europeanize Portugal, presenting modern European trends in the country, but also and above all to make Portuguese modernity known internationally. This justifies Pessoa's attempts to make the magazine and the aesthetic currents associated with it known in the European space, with special emphasis on London – with numerous drafts of letters on this subject addressed to various English editors and fragments of prefaces in his literary estate – and Madrid, even writing to Miguel de Unamuno in the sense of celebrating an “Iberian entente” that projected both literatures internationally.[10]