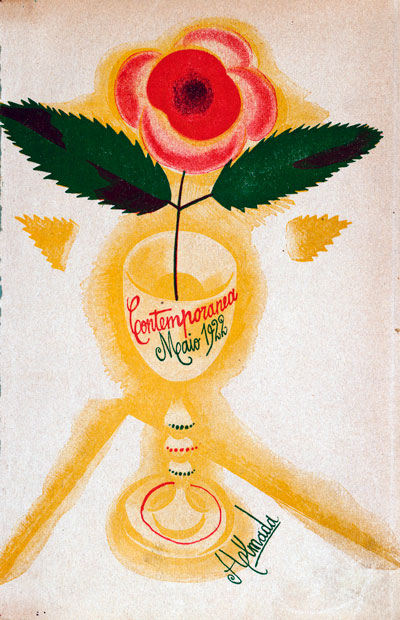 This is a magazine that aims to be contemporary. Interesting title for a magazine that lasts so long and has a bad start. In the first article, an open letter 'to an esthete', there is a curious passage that defines the direction of the magazine, and largely explains its name: this is a magazine, not by futurists, a negative epithet, especially for the generation that this 'esthete' represents, but from 'contemporaries', young people of his time who want to promote Portugal.

The specimen number (1915), from the outset, is divided into three parts, with three different covers (one, the main one, by Almada and the other two by Jorge Barradas) and proves to be very focused on the war, a year before Portugal entered the offensive. This is the theme of many of the articles, as it can be read in other publications, albeit in a more indirect way, as is the well-known case of Orpheu.

Apart from the obvious parallel that we can establish with that absorbing comet that was Orpheu, we cannot read the specimen number without losing sight of another ephemeral publication, with a single issue, from that same year: Eh Real!, more political pamphlet than cultural magazine, which survived time due to the inclusion of Pessoa's article entitled 'O Preconceito da Ordem'. In this sense, in the first issue of José Pacheco's magazine, the photo-report on the secularization of the government is curious (p.16). It is however presented with an ideological stance diametrically opposed to that of Eh Real!, that is, clearly in favor of the Pimenta de Castro dictatorship (one of the reasons for the Contemporânea project to fail in its first life). On the other hand, the specimen number is also reminiscente of Ilustração Portuguesa (Portuguese Illustration), a very influential periodical, a variety magazine, that  António Ferro would briefly command (between 1921 and 1922, a period when the second series of Contemporânea actually came out), with long illustration boards (e.g. compare Almada's cover for the specimen).

Also noteworthy in the specimen number is a range of themes, a feature of the magazine for the rest of its existence: women are the focus of attention with many (final) pages dedicated to them, but always in the sense of the misogynist idea of ​​women in the heart of the household. This situation, however, seemed to be a little subverted in the following decade, when publishing was resumed, as we shall see.

Contemporânea is the work of José Pacheco. Of course, from a graphic point of view, it is largely Almada's responsibility, but we cannot reduce the role that Pacheco played as an aggregator of various wills and various styles, revealing his multifaceted social relations. A brief foray into its estate reveals its web of connections, and the way it orchestrates each issue around an idea of ​​cosmopolitanism (also revealed by articles in several languages).

Thus, Contemporânea is a magazine of great regularity between numbers 1 and 9: from May 1922 to March 1923 the nine issues come out monthly. Then, in 1924 there is only one, in 1925 there is only a supplement (only discovered in the last quarter of the 20th century by Fernando Guimarães), and finally 3 numbers in 1926.

Contemporânea presented a controversy in its pages, the controversy of the “Novos” (Young), as it became known, and which in essence refers to the quarrel of the ancients against the moderns: at stake was the renewal of the governing body of the National Society of Fine Arts, which was accused of being obsolete and out of step with the reality of modern art. The SNBA exhibitions were the example of the sanitation that artists of the most recent generation, who followed modern art, were being subjected to. The 1925 supplement account for this controversy in several articles.

But there’s more about the role of women. If, on the one hand, the woman is the figure most portrayed in the illustration included in the magazine, it is also the woman who plays an important role as a columnist and active contributor. I think of Vera Gharb (pseudonym of Emma da Câmara Reis (1897-1968), for example, in an article included in number 7 of the magazine, about Satie and six other composers who were beginning to be known at the time. Totally unusual in Portugal, this article reveals a musicologist attentive to the most avant-garde music scene.

As a matter of fact, music chronicle is a very strong part of the magazine, as it could not be otherwise. Here, the role of Luís Moita should be highlighted, as for the excellent article by Manuel Ramos. Maria Antonieta Lima Cruz (1901-1957) is also mentioned as an excellent musicologist, in a chronicle by Moita.

I would also like to point out Carlos Babo's fragmentary article, in number 6, an 'epistle to women' which is nothing more than a somewhat misogynist exhortation against their 'mystery': "And it only saddens me to see you puffed up to be attributed mystery where you do not have it", as he says in a nutshell. This is even echoed in this special Christmas issue of 1922 on "Sur l'amour sur les femmes honnetes... et sur les autres", by Costas Ouranis, a renowned Greek poet. On the other hand, in number 9, on the penultimate page, which contains the summary of the year in editions, conferences and exhibitions, it is curious to see the gender balance in this last domain: four women and four men with individual exhibitions. And, more significantly, the inclusion of Olívia Penteado, the great promoter of the Semana de Arte Moderna in 1922, as a contemporary correspondent in Brazil, according to information in the magazine's sides (No. 2 and 3 of the 3rd series), is symptomatic.

As can be seen, it is a complex and disparate attitude that Contemporânea gives shape to, announcing a certain (I would say tenuous) female emancipation, but with its feet firmly anchored in the present.

Despite only revealing itself truly hispanophile in its last series (see how the subtitle changes: 'Portugal * Ibero-Americanismo * Arte'), Contemporânea demonstrates since the first issue that it is a magazine made up of authors who not only shared a sympathy for the Spanish language and culture (as evidenced by the title page that follows the index of this series), but also with the inclusion of several native speakers, in most cases diplomats working in Portugal and their friends (modernist Ramon Gomez de la Serna here being noteworthy).

From the point of view of graphics, it is a magazine clearly inserted in its decade - 20, also in terms of advertising. At the end of the first series (3rd issue, June 1922), the blunt and vigorous assertion that advertising is ‘not meant to tear’ is curious, since it is considered also art. That is the exact case with the plastic contribution of Almada Negreiros, from the specimen number, and especially when involved in advertising illustrations: see, in number 4, the publicity to chocolates from 'Fabrica Suissa', which he asserts the poster, 'they are Portuguese'. In fact, as we have already alluded to, Almada is really the greatest graphic contributer to the magazine, one of director Pacheco's greatest allies, portraying authors and allowing himself to be portrayed (we can read, associate) with sketches-self-portraits in pencil. Other illustrators participating in the magazine include Bernardo Marques, Eduardo Viana, Jorge Barradas and Stuart Carvalhais (author of many of the vignettes), the Spanish Vazquez Diaz. By the way, another detail that continued in the magazines of the previous decade, but extremely innovative, is the illustration as a reproduction of the work of art, as happens with some paintings by Eduardo Malta and sculptures by Diogo de Macedo.

On the other hand, the figure of Almada Negreiros is also represented in writing, which in the first issues is extremely scathing and critical (read as an example 'O Dinheiro'), always involved in social issues related to capital monetary - and its importance in class differentiation. Some of these texts are even precursors of a type of post-colonial attitude, as one reads in 'O Diamante'. Mário Saa's eminently autobiographical articles are also paradigmatic of the best that the magazine has produced as a social critic, in hybrid and truly avant-garde texts.

Finally, António Ferro's presence in Contemporânea – despite the fact that the director and founder and the greatest influence is, without a doubt, José Pacheco –, is undoubtable in his countless contributions. On the other hand, he is also defended on some occasions (notice in one of the last pages of number 10, the review written during the premiere of the play 'Mar Alto'), which, incidentally, is quite highlighted in the transition from the second to the third serie , with the 1925 Supplement. Here, there is not only an article by him about the new Brazilian generation (due to his visit to Brazil where he went to present 'The Age of Jazz-Band', as referred to in an open letter by the Brazilian Oswald de Andrade) but he is even praised as a new author on 'realized work' [sic].

The 1925 Supplement, by the way, which deserved a comprehensive study by Fernando Guimarães, published 25 years ago in the CNC's tribute to Contemporânea ('Almada, Pacheko, Contemporânea'), is a curious case in the context of the magazine. If we want a snapshot of what was going on in the 1920s, these are the pages to read. Leafing through the short pamphlet, almost a century later, two articles stand out in the understanding of the period. One about the new generation in Brazil and another about the same on this side of the Atlantic. Basically, and while a new issue does not come out (due to the editor's illness, as we are told) it is a supplement concerned with theorizing a new generation, but evoking their dead in the first place. An interesting detail is that the very enumerative article on the members of this new generation does not include Fernando Pessoa, who was neither unknown to the magazine (he had already published widely in it, including in French) nor his generation.

In truth, José Pacheco's illness means that he will never be able to edit another issue of the magazine after the third series of 1926, despite the multiple clues from the estate and the evidence for a fourteenth issue (which can be consulted in this critical edition). But Contemporânea's legacy makes him an unavoidable figure for the study of cultural interactions in Portuguese Modernism and abroad, as these pages so well prove.