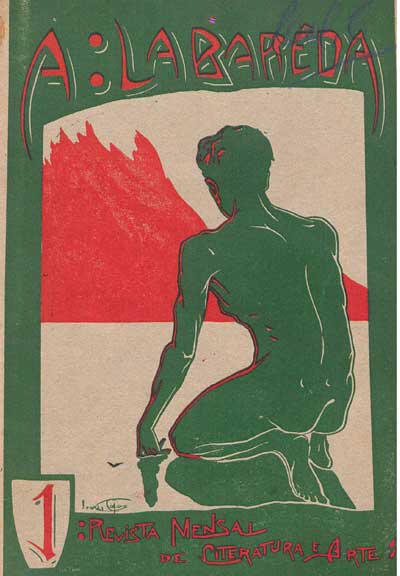 A Labareda calls itself “Revista Mensal de Literatura e Arte” (Monthly Magazine of Literature and Art) and is a saudosista magazine in Porto. It should not be confused with another magazine, with no definite article, and published ten years later with other coordinates of thought, another ideology (in the second series it clearly states it is integralist), and which lasts 22 issues and two series (12 numbers in the first, 10 in the second) until 1926.

The beautiful and modern design by Soares Lopes (1879-1944) opens the two issues of this magazine what constitutes one of the best covers of modernist literary periodicals. It is a man sitting on his back, a symptomatic and symbolic attitude of the arrière-garde character of the content itself.

Costa Carregal printing house, in Porto, which had already been in charge of the printing of A Águia and A Vida Portuguesa, is the responsible for the graphic execution of this northern project, as the title page informs us. Other important elements to be rescued from this page: Narciso de Azevedo (1888-1969) was the literary director (also a collaborator on A Águia), while the painter Joaquim Lopes (1886-1956) was its artistic director. Still a student at the then Academia de Belas Artes (current Faculty of Fine Arts) in Porto, where he would later be a professor and then director at the end of his life (1948-52), Lopes' artistic curatorship is not only conservative and academic, but also close to the impressionist style that he studied in Paris during the 1920s. As far as the artistic part is concerned, then, and being a northern magazine, it presents the collaboration of the finest local artists: sketches by renowned António Carneiro and Vieira Portuense (two male nudes ), as well as the aforementioned and still young Adriano Sousa Lopes.

In the literary part of the magazine, the level of interest is parallel: the contribution is equally eclectic, between new and established authors. If, on the one hand, there is a clear bet on the epistolography of recognizable names - for example, in the first issue, unpublished letters by Eça de Queirós and Camilo Castelo Branco (another, in the second issue, to Manuel Laranjeira) - on the other hand, the magazine is essentially composed of poems from the new generation (Afonso Duarte, Mário Beirão and Teixeira de Pascoaes). Curiously, it is the symbolist Eugénio de Castro who opens the first issue, with a love-themed sonnet, inspired by classical culture ("Na Via Appia", title of the illustration, two pages later, by António Carneiro). This taste for the exotic is also reflected in António Patrício's contribution with his "Diálogo na Alhambra", perhaps the magazine's most unexpected and curious text: being a theater piece located in the Andalusian monument, two friends discuss concepts of art and aesthetics, putting in opposition different currents of thought, suggested from the corners of that garden where the action takes place. In a word, a modern text that begins and ends with an important reference for modernist writers: Maeterlink and his 'daily tragedy'.

Narciso de Azevedo, the director, however, embodies, in his own poetic contribution, the more traditionalist and nationalist side of the magazine, publishing sonnets from a book soon to appear ('Sonetos Heraldicos', whose subtitle is a submission to the integralist motto 'Pola ley e pola grey') where religion and national history are the protagonists.

Arrière-garde magazine without deliberate or self-confessed program, A Labareda is under the conservative influence of the northern saudosism, that the modern design of the then-young Adriano Sousa Lopes is not an appanage, even if it is in its iconographic symbology.