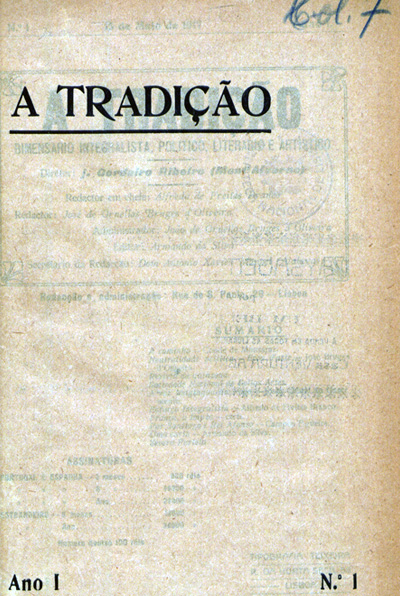 During the sixteen years that elapsed between the implantation of the Republic and the military coup of 1926, which opened the door to the emergence of a lasting dictatorship, many were the aspects of social and political turmoil that asked distinguished men to make a personal commitment to public life at the time. The periodical publications of this First Republic are thus true mirrors of the various doctrinal-partisan struggles and the conflicts between eminent personalities.

In this sense, A Tradição is a hybrid, a publication whose subtitle clearly defines the content (and its time): 'Bimensário Integralista, Politico, Literário e Artístico'.

Its name points, moreover, in a concrete direction: here the values ​​of an old regime are respected. This is not a typical modernist magazine, with its iconic visual grammar, starting with the cover, which has a very identifiable line (in fact, the cover is non-existent in this brochure).

Its political affiliation is clear from the first text, authored by Alberto Monsaraz, a famous integralist who had fought for the defense of the monarchy, even after the 5th of October 1910. The 2nd Count of Monsaraz praises the magazine, positioning it in the Portuguese Integralismo, and speaking of its director in the following way: "Tradition, written by students, including Cordeiro Ribeiro [who] has already, with less than 20 years, 5 prisons in defense of his beliefs, is another decisive assurance that our hopes are not in vain, nor has this propaganda of unrepentant reactionaries been ineffective." (p.4).

As is also customary in publications in this lineage, its pages clearly serve to stimulate its promoters, that is, the members of the board, without any scruples. On page 5, in a section entitled "Echos d'arte", which refer to important events and publications, Alfredo de Freitas Branco, editor-in-chief of A Tradição, a fierce opponent of the republican regime and who would sign several books under his aristocratic title (Viscount of Porto Novo), speaks of the Futurist Conference, by Almada Negreiros, in a very harsh way ("a futurist conference, whose appreciation has no place here, since futurism is just a 'blague'...”) In the next section, Armando da Silva, the magazine's editor, publishes a very favorable review of Freitas Branco's most recent book (Charcos, Editora Casa Ventura Abrantes. A real contradiction when the first piece presented in "Echos d'arte" would be precisely against a concert by Ruy Coelho, not even talking about the concert itself, and accusing it of lack of 'moral suitability'...

On the other hand, and regarding to the literary review, A Tradição, also as would be customary in these periodicals, refers to the titles received and recently published. This first issue speaks of the work of João Cabral do Nascimento, which Fernando Pessoa had already mentioned in the last text of Exílio (1916) where he theorized Sensacionism, As três princesas mortas num palácio em ruínas. Once again, such an attitude favored an integralist author, even more if we think that he is going to replace Alfredo de Freitas Branco in the second and last issue of the magazine, when the Viscount of Porto Novo decides to enlist to fight in the 1st World War. In that same initial issue (May 15, 1917), the only literary text of the magazine is by him, being a conservative sonnet, on "A Voz Longínqua da Raça". And as expected, it is in this second issue (of June 9, 1917) that Armando da Silva writes about the new editor-in-chief's book. It should also be noted that, in this second issue, more literary texts are published, not only by the main editor (“Sonetilhos”), but also by Afonso Lopes Vieira, a renowned writer in that perio (in the pages of A Tradição there is also a review of his recent Ilhas de Bruma).

With regard to the visual aspect of the magazine, it is worth noting the absence of any illustration, which further confirms the austere and political nature of the publication, only presenting, on the back of the cover, the effigy of Portuguese Integralism (Integralismo Lusitano), with its motto: a pelican with the inscription "Pola Grei and Pola Lei" [sic].