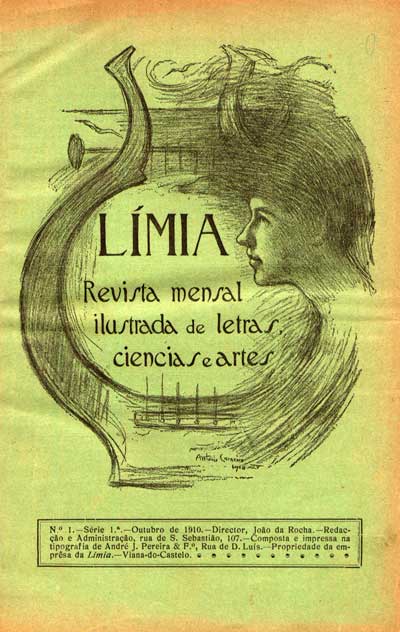 Límia appears simultaneously with the establishment of the Republic in October 1910, the date of the first issue. Subtitled "Monthly illustrated magazine of letters, sciences and arts", it was in fact a regular and uninterrupted monthly publication until April-May 1911, versed in various arts, but with an emphasis on history, literature and art. Sometimes this date appears erroneously since there is an error in the date on the cover of the final double issue - 1912 - that the preliminary page, with the correct date (1911), resolves, as well as by reading some articles inside.

Cláudio Basto was one of the great promoters of the magazine, to which he invited his former colleagues from Coimbra: Leonardo Coimbra, for example (with whom he had founded, together with Álvaro Pinto and Jaime Cortesão, the magazine Nova Silva), always edited by João da Rocha, publicist and literate.

The last issue of the magazine cost 160 réis (16 cents), inflated from the previous year, when it started to be sold for 100 réis (10 cents), an average price for a publication with this quality of paper and layout. It should be remembered that, during the period of almost a year of this magazine, three printers ensured its printing, which may reveal tight budgetary control. The first two numbers were the responsibility of André J. Pereira & Fº's Typography, in Viana do Castelo, later going to Typography Universal (Porto) from numbers 3 to 6, and the final double number was printed again in Viana do Castelo, where the magazine was based, in the Modêlo typography. We know, at the end of issue 4, however, that the sale of the magazine has been going well, because the first issue had sold out. It is therefore surprising that the end was imminent five months later.

Nationalist and regionalist magazine, very similar to what was done in this period - recalling, for example, the structure and ethnography of what will be Terra Nossa (1916), the first issue tells us about Gonçalo Velho, the settler of the Azores, from his late-medieval house in Braga, alongside the historian Félix Alves Pereira's "Fortified Habitations of Northern Portugal" and the "Onomatology notes" by the renowned Leite de Vasconcelos. Articles, in reality, focused on a particular province, seeing it through toponymy, architecture, archaeological remains (number 2) and its artists/poets/illustrious. The magazine was then the stage for luminaries from Minho at the time, from the regionalist poet José Vale (pseud. João Verde) to the Viennese historian Luís de Figueiredo da Guerra, to Teixeira de Pascoaes, reaching other places with Afonso Lopes Vieira, a poet otherwise much referred to here.

A publication very attentive to what was published, to the ephemeris, and to the European literary and artistic context, it presents several articles of interest, often inserted in thematic issues. Number 4, for example, is dedicated to the eminent historian Sousa Viterbo, renowned dean at the time, on the occasion of his death, and this was also, curiously, the magazine where he had published one of his last articles, about a Flemish painter (Christopher of Utrecht). In this line, Tolstoy and his death are also mentioned: in number 3, of December 1910, in an eulogy article by an illustrious northerner, Leonardo Coimbra, and then in number 4, another article by Jaime de Magalhães Lima, who was a theorist of naturalism and vegetarian, just like the Russian writer.

Límia was a magazine with fixed rubrics ('Panorama', 'Varia') that were rarely obliterated (except, for example, in number 4, where space had to be found to talk about Sousa Viterbo). An analysis of the 'Bibliography' section, usually at the end of the journal, points out other interesting volumes from the period, as well as indicating what was read at the time. A good example can be found in number 6, where the publication of the magazine 'Figueira' is indicated, namely its first two numbers (in a magazine that will have 6 series between 1911 and 1916), and where it was published, for the first time, the set of Chinese elegies that were promised for the second number of Centauro, which, as you know, never came out...

In short, Límia was the typical magazine of the 1910s: regional and nationalist in nature and in program, but where, from an artistic point of view, a timid modernism is already beginning to emerge, thanks to the collaboration of some new ones (J. Salgado, Luis Felipe) although graphically it is dominated by the beautiful symbolist cover of António Carneiro, the renowned painter of that part of the country.