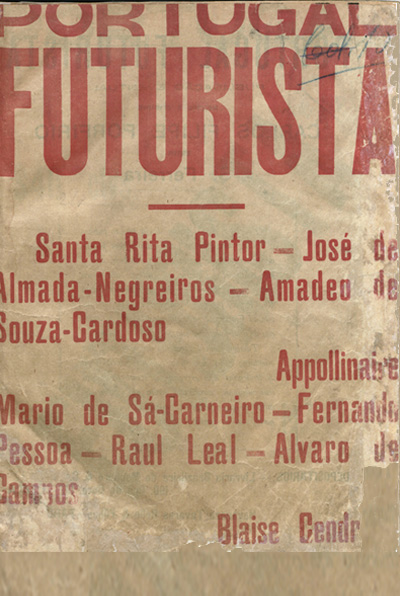 "The boys of my time! And never in Portugal were the boys more boys than those I knew and esteemed in 1917, at the Café Martinho, because none like them believed so much in their youth. We, in 1917, believed in us, in our voluptuous and optimistic youth. Being young was for us a patriotic duty. Portugal aged - to refresh itself it needed the convinced and sincere youth of boys. And we, out of patriotism, not only wanted to refresh Portugal with our youth, we also wanted to make Lisbon the head of Europe. And the youth of that time, who had already launched some modernist magazines – and to the astonishment of all the Portuguese, made a magazine that surpassed everything that had been published so far in audacity and originality: Portugal Futurista. "

This is how Rebelo de Bettencourt summarizes the context of the emergence of Portugal Futurista, in that it is one of the rare personal testimonies that have come down to us about this now mythical magazine.

Portugal Futurista was not, in fact, just any magazine. Despite (et pour cause) its unique number, its immediate apprehension is quite revealing of the content, as unusual as Orpheu's two years before, and which still makes us smile today. There is, in fact, a letter dated 11 July 1917, which shows continuity between the two magazines, even though we are talking about different things (and figures). Penned by Fernando Pessoa, the letter talks about the possibility of publishing a third issue of Orpheu, an edition that, as we know, never happened in his lifetime. Moreover, it is Pessoa himself who is at the center, simultaneously, of a continuity and a rupture in this magazine: if on the one hand he includes poems in his own name ("Episodes" and "Interlude Fictions") that are the opposite of what we could consider 'futuristic', via Álvaro de Campos, he wrote the manifesto-text "Ultimatum", the subject of a curious offprint that questions the journal's own classical dating (at the end of the text, we are told that "Saudação a Walt Whitman" would appear in October 1917 in Orpheu 3...).

In fact, given the lack of publicity prior to the appearance of the magazine, it is only through an astral chart that Pessoa made (present in the his literary estate) that we are aware of a date of appearance (and sale of the first issue - October 31st, at 9h) and the seizure of the magazine (2nd November). Until today, much has been speculated about these dates, as the arrest warrant has never been located. This is the only document that points to a possible dating, and clarifies that, contrary to what has been said, it was not immediately apprehended at the  typography.

There is an internal complexity in this single issue, of which the two hors-textes are the hallmark, one promoting the "Russian Ballets" - which would arrive in Lisbon in December - another to promote the work, published two weeks later, by one of the key elements of the magazine: A Engomadeira, by Almada Negreiros. There are, in fact, three known variants of the hors-texte "A Engomadeira", which we discussed in the commemorative exhibition of the magazine's centenary (BNP, 2017). With regard to "Russian Ballets", even though the text is signed by three people - Almada, Ruy Coelho and José Pacheco, we know (and we understand when we read) that Almada was the only one to write it, in October 1917 , when there was still talk of the Russian Ballets coming to Lisbon and the writer had not actually seen them (they would only be in Lisbon between December of that year and January of 1918, having performed 11 shows in all).

On the other hand, it is also necessary to relate the appearance of this magazine with another (futuristic) central event of 1917: the 1st Futurist Conference, carried out by Almada and Santa-Rita at the recently opened Teatro República (now São Luiz), in Lisbon. In Portugal Futurista, not only does the April conference program appear, but we also have the full reproduction of the manifests read in the pages of the magazine: the Music-Hall Manifesto (by Marinetti, 1913), Manifesto of Lust (Manifeste futuriste de la luxure), by Valentine Saint-Point, and Futurist Manifesto to the Portuguese Generations of the 20th Century (text written by Almada for the Conference).

We cannot forget that one of the peculiarities of Portugal Futurista is its connection to another publication, O Heraldo, from Faro. As is well known, this periodical (stimulated also by Orpheu's 1915 bombastic novelty) sought to promote the futurist movement, maintaining a column, since the end of 1916, in which it revealed texts of this nature, signed by creative pseudonyms. It is in this Algarve newspaper that we learn, in a letter dated August 5, 1917, written by Santa-Rita Pintor and Almada Negreiros (self-entitled “Comité Futurista', which appeared in Lisbon the previous year), that this futurist magazine would appear shortly. However, O Heraldo would stop by the end of the month of August and would not see the appearance of Portugal Futurista.

Unrepeatable magazine, editorial enigma, stone in a pond in times of war and apparitions, Portugal Futurista was, in short, an attempt at insurrection of a certain enlightened youth, united in its diversity to introduce Portugal into the literary and artistic 20th century.