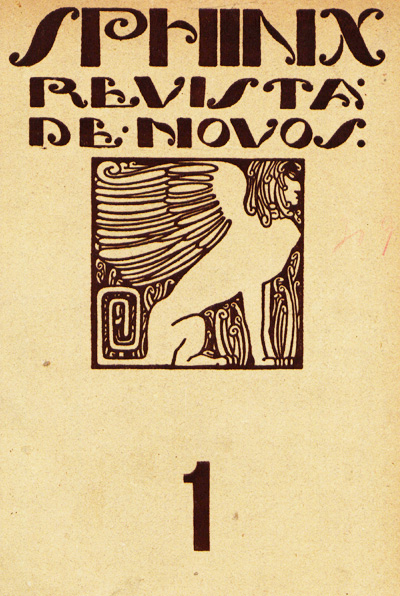 Sphinx is a “magazine for the youth”, as it calls itself, having published two issues in 1917. Its direction will be divided between the literary part, provided by Laura Nogueira and Celestino Soares, and the artistic part, under the responsibility of Leitão de Barros and Cottinelli Telmo, who were then in their twenties.

Celestino Soares is responsible for the presentation of the magazine, right on the first pages of the inaugural issue (February 1917), where we can read the following:

"Our magazine is, therefore, one more of the many attempts for the Emancipation of the Spirit that Civilization and Schools have transformed, in order to make the man of today - an 'anti-human creature, without beauty, without strength, without freedom, without laughter, without feeling, and bringing in itself a spirit that is passive like a slave or impudent with a histrion', in such a way that 'all, intellectually, are sheep treading the same track, swaying the same bleat, with their muzzle leaning towards the dust where footprints already trodden in a row'"

In Sphinx we immediately feel a proud desire (albeit, perhaps, insipid) to do something different. The very way of looking at the magazine as an object is more linked to an idea of ​​a magazine that became more widespread in the 1920s: a set of literary sheets, always with illustrations for each text (thus different from Orpheu, Exílio or Centauro), and, above all, with advertising. It might be interesting to take a close look at some of these advertisements to other magazines in the established literary milieu. It is worth mentioning the Publishing House “Para as crianças” ("For the Children"), owned by Ana de Castro Osório. Her brother, moreover, will contribute to the second issue with a poem.

Another way to show yourself 'different' is to pay attention to what is happening outside Portugal. In a small note with which the first issue ends, someone whose pseudonym 'Esfinge da Hélade' (perhaps the editor Luís de Almeida Nogueira, in case the signature in the column of the second issue is comparable) writes a column and a half about the disappearance of 'an esthete' ': none other than the vorticist sculptor Gaudier-Bzerska, one of the elements of the English modernist movement, headed by Wyndham Lewis and who had published the magazine Blast in the year of Orpheu (and of which both Sá-Carneiro and Pessoa had a copy).

As far as Sphinx's artistic collaboration is concerned, the beautiful sphinx drawn on the cover, much in the taste of the 1910s, and certainly authored by one of the artistic directors, is emblematic of a carefully crafted magazine. The literary collaboration is far from being innovative, with names like João Cabral do Nascimento, Américo Durão, and even a review, in the second issue, of what seems to be an important book in 1917, listed in other publications: Charcos by Alfredo de Freitas Branco (the editor-in-chief of the first issue of A Tradição).

On the other hand, Sphinx aroused some interest from other publications, perhaps because of the connections these distinguished young people have with other powerful families. As an example, O Heraldo, in its third and last series in the Algarve, when it was already publishing the column of futuristic texts "Gente Nova", not only reports the appearance of its second issue (March 1917) but also one of its new futurists authors merged references to the Lisbon magazine in one of its texts (O Heraldo, nº382, May 20, 1917). In the second issue of Sphinx, moreover, the gesture is reciprocated with a reference to O Heraldo (p.47). Another pertinent link is Terra Portuguesa, a periodical publication entitled "Ilustrated Journal of Artistic Archeology and Ethnography" (directed by art historian Virgílio Correia, who also belonged to the direction of Atlântida (1915-20), and had five series between 1916 to 1927) whose advertisement appears on the second page of the first issue.

The "Youth" column within a youth magazine' intends to dictate the names to retain in the new generation. In the first issue, artistic director Leitão de Barros has no qualms on writing about the talent of his colleague Cottinelli Telmo; Helena Roque Gameiro (whom he would marry in 1923) is also referred to as a promising talent, and on another page in the same issue, it is the turn of her sister, Raquel Gameiro Ottolini, to contribute to the magazine with a maritime illustration (p.12) alongside the bucolic poem by Teresa Leitão de Barros.

Thus, we see how this is a publication for young people wanting to break with the past, but still very much attached to nationalisms and pastisms of various kinds, either for its content or for its extra-literary links with other publications and their protagonists. It is, however, a magazine with a very unique design, in what would be the typical literary magazine of the following decade, with advertising and graphic illustration.