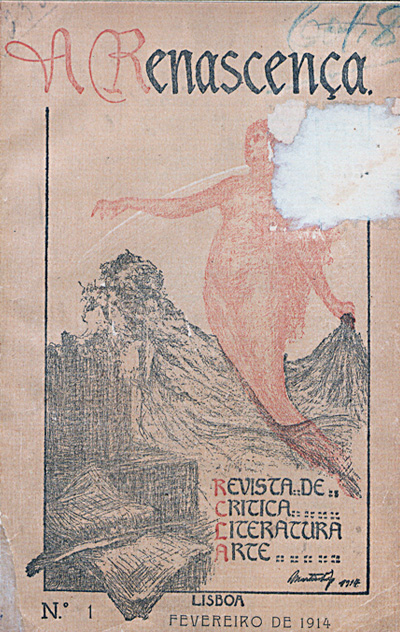 A Renascença, a “criticism, literature and art magazine”, according to the subtitle, was a publication of just 16 pages, printed in the Anuário Comercial Typography, which two years later would be responsible for the printing of Centauro and Terra Nossa, and two years earlier he had printed A Rajada. Although it presented great aesthetic care, an issue only cost 5 cents, which was around the normal for a publication at the time (if we consider that the elegant, bigger and more voluminous Portugal Futurista would cost 40 cents in 1917).

A Renascença ("Renaissance") is, of course, a symptomatic word. The ultimate goal of these first publications of Portuguese Modernism, whatever their political and aesthetic tone, was to try to modernize Portuguese culture and make it reborn in the new republican era. A Renascença, thus, is no different, and prepares what will appear next year, with the stratospheric Orpheu. This is easy to understand by simply analyse the cast of poets it summoned: Coelho Pacheco, its editor, a man intimately linked to the fine flower of this generation and himself the author of a poem that only after Pessoa's death became known (in Orpheu number 3); Alfredo Guisado, one of the least known of this generation, poet of Orpheu and creator of the pseudonym Pedro Menezes, who publishes here a poem from the future book Distância, in a tone somewhat distant from the poems of 'Satan à noite' in Exílio; Mário de Sá-Carneiro, still alive, and revealing here a lesser-known side with a Russian pseudonym, or semi-heteronym, with a poem of his own, "Além", a fragment of a larger work, according to the critical history he purposely invents encircling the poem; And of course, there is Fernando Pessoa, who purposedly provides “Impressões do Crepúsculo” ("Impressions of the Twilight"), a pamphlet-poem from Paulism, a phase of his sensationist theory that would culminate in Intersectionism. It is indeed curious to find, at the beginning of the magazine, a sonnet by Júlio Dantas, the nemesis of this generation, symbol of the established and institutional poet. This is not the only case where the two greats of Orpheu and his nemesis overlap in the same publication.

A word concerning the magazine editorial. Signed "A Renascença", it is written in this impetus for renewal that we talked about above. With a writing dedicated to the 'friendly reader' and very passionate and exclamatory, it is a vague and idealistic program, words that he uses to define his 'Commitment', embodied in the past (but orphic) idea of ​​the 'lyre':

If, however, you feel all my dream I will try to fly, fly, venturing into the confused and indecisive ether where so many limits are sought and are not reached, and if in my vague, idealistic path I find any new divine, subtle, vaporous glow that you can feel as good as I do, I will bring you inside my soul, so that I can dazzle you with the light, passionate enchantment of your word, which will give us so much life, because it feeds both of them!"

The most used, and most significant, word in all parts of the publication is, as here, 'vague', 'dream', “idealistic”, keywords in Symbolism, but also keywords in the poetics of Mário de Sá Carneiro. "Impressões do Crepúsculo", the key poem of this magazine, is itself the Paulismo program, and it is printed in two parts that appear to us with totally different graphics and aesthetics: in a first, and more traditional, four very Portuguese quatrains which includes the famous "Bell of my village", and a second part, the so-called manifesto-poem that gives its name to the current of Paulism: "Pauis de roçarem ansias...".

Among the contributors mentioned, and in order not to emphasize his most famous text and which gained the magazine the most critical fortune, that of Pessoa, we can highlight two cases: Mário de Sá-Carneiro, who, on the one hand, is honored in one of the poems, on the other, he is one of the published authors, with an unusual poem to which we have already alluded. Then Coelho Pacheco, who occupies a place within the magazine's administration, and who, in addition to having a poem here, also has a long text "Zizi", signed with a pseudonym, Line.

In short, a magazine that was the organ of Paulism ('without that name appearing once', as Fernando Cabral Martins says), A Renascença can be called the 'pseudonyms' magazine, as it includes two, lesser known but equally unusual pseudonyms: those of Sá-Carneiro and Coelho Pacheco, not to mention the cases of collaborators Guisado and Pessoa, who cultivated an 'alter ego' in other parts of their body of work. A magazine very much embedded in its time, in which Dantas collaborated, it is an example of the complex web of relationships that this first modernism reveals, and that a study of literary periodicals allows to unearth.

The cover is probably by Martinho Gomes da Fonseca, who would make the first cover of Terra Nossa in 1916, taking into account the signature in the lower right corner. The aesthetic similarity of covers in both magazines also seems to point in this direction.