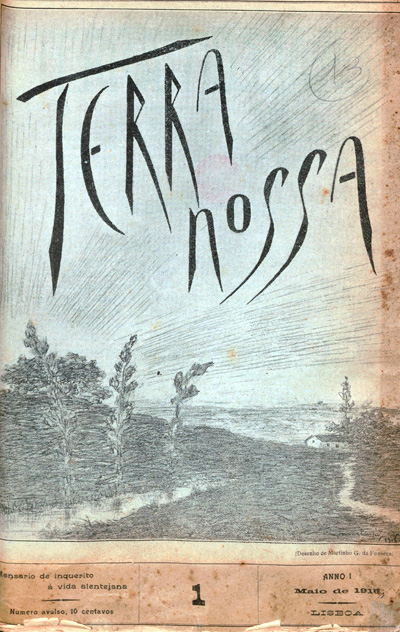 Less known than other 1916 magazines, Centauro e Exílio, Terra Nossa had a career of three irregular issues (May, June, September) - even so, longer than those mentioned above and than many other periodicals of this nature. The three numbers of this 'monthly journal of Alentejo life', as it is subtitled, have several peculiarities that are worth noting.

In the first place, Terra Nossa seems to be, out of the Portuguese magazines located in the First Modernism, one of the most ethnographic, an ideal expressed from the outset in its subtitle. Everything in this magazine seems to refer to that Southern geography.

Domingos Garcia Pulido, integralist, signs the magazine's editorial program, saying that the periodical was the result of an initial idea, which ended up not being published ("for reasons of a particular nature whose dwelling matters not at the moment": "Terra Mãe"). It is assumed that it would be a publication with the same nature, both by name and by those involved: the artist Correia Dias and Francisco Beliz, an author who appears in the second issue, in June, with a poem, and who will collaborate with Contemporânea in the 1920s and admirer of Sardinha's work, dedicating an essay to him ("The love of the land in the work of António Sardinha"). It is indeed a nationalist magazine, as "Terra Nossa can also mean Land of Portugal", a publication that intends to focus on that province as an attribute of the rest of the territory, "a neutral field of the Alentejo understanding".

Let's start then to glimpse the aesthetics of the covers, and the way it goes in the same direction. In general, it presents itself without many details, with an allusion to Alentejo life. The colors are very soft – sky blue for the first cover, lemon yellow for the second and pastels for the third. In the first issue, the cover is drawn by Martinho Gomes da Fonseca, aged 26 at the time (1890-1972), a disciple of Columbano Bordalo Pinheiro. In number two, and according to the section “Ponto Final”, the magazine's last page: "The cover design of this issue of Terra Nossa is an Alentejo motif, which Saavedra Machado took from nature in the middle of the countryside. It features the blacksmith's house, in Santa Victoria do Ameixial, a small village, full of evocations, on the edge of the Estremoz municipality". The third and final issue was authored by another disciple of Columbano, Gil Romero, and we are given the information that the original is a watercolor.

On the other hand, Terra Nossa was commonly known for the Pessoa collaboration in the third issue (September), with one of the fundamental poem by Pessoa himself, 'Ceifeira', in a version that is almost equal to the definitive one (version that is later revised when it appears in Athena, nº3, 1924, and which is close to the one we know), which only rewrites two verses and one of the stanzas. This contextual and intertextual reading of the Pessoa poem is curious, which fits in Terra Nossa as an illustration of an aspect of that same agricultural experience in the south, preceded, curiously, by "Ceifas" by Américo Durão and "Carpideiras do Sol Morto" by Ferro (It is worth mentioning the header: a vignette with a Millet version of the gleaners, illustrating the poem) . Furthermore, to this indirect comparison that can be made between the two reaper poems - Pessoa's and Ferro's - we can add a third, equally bucolic, unpublished by José Duro, "Bucólica".

In every issue there is a photograph of an illustrious poet - Fialho de Almeida, a recently deceased writer from Alentejo, in the first issue, the Count of Monsaraz in the second and José Duro, a well-known poet from Alentejo at the time, in the third. Once again, the strategy from the point of view of content is to extol the talent of the land, or of the 'Heath-Mother' as we are told in the editorial, be it coeval talent or the unavoidable names of the recent past. In this sense, Brito Camacho speaks of the 'Celeiro de Portugal' (Barn of Portugal) and Aboim Ingles participates with an econom article, centred in the Alentejo province.

From a literary point of view, and apart from Pessoa, the contributors to the other issues of this magazine are distinguished. António Sardinha collaborates with an extensive 'Poem of Autumn' "The Autumn will rise, my friend, how will our aging be..." It is António Sardinha who in the second issue devotes several pages to the Count of Monsaraz, autobiographical pages that analyze the author's work, followed by what is the 'last poem of the Count of Monsaraz'; an article on Fialho de Almeida (1857-1911), his last days, by Garcia Pulido, followed by an unpublished article by the Alentejo author and, finally, decadent sonnets by Hernâni Cidade and Alberto de Castro Osório.

This third and last issue ends with an article about Eça de Queirós in Évora, with excerpts from the chronicles he wrote for the newspaper Districto de Évora, and with the announcement of a fourth issue that would never come out: New poems by Beliz and Hernâni Cidade, a new article by Sardinha and, as can be seen, the same editorial line.

Integralist and Conservative (Luís Chaves, Sardinha), Terra Nossa presents, in short, a nationalist idea of culture that foresees the sophistication of later magazines, from the Estado Novo, with the distance and projection of a Portuguese region in the national territory.