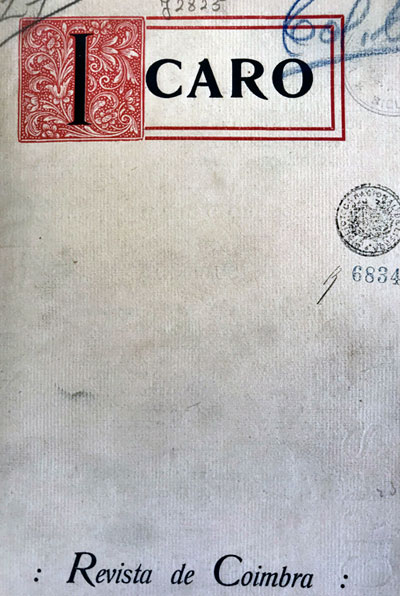 Published between 1919 and 1920, this magazine presented three issues with a monthly periodicity, being directed by Ernesto Gonçalves. It is a conservative and monarchical magazine with roots in Madeira, as both Gonçalves and Cabral do Nascimento were from the Portuguese island, co-founded in Coimbra (with Alfredo Brochado, Américo Cortez Pinto and also Madeira integralist Luís Vieira de Castro) in their time as law students at the University of that city. Therefore, it is not surprising that it is subtitled "Revista de Coimbra", thus underlining the pride in the connection to that city, but also emphasizing a nationalist feeling.

Just as it is not surprising what Fernando Cabral Martins tells us, at one point, in his entry on the magazine: "There was a section entitled “Os Modernos", which, for example, published a portrait of Albert Samain by João Ameal, who translates a pre-modern decadent attitude ("His art was, for him, the glass case in which he isolated himself, like an inadaptable one"), a sign of the enormous extension and ambiguity that the word "modern" contained." (cf. Dicionário de Fernando Pessoa e do Modernismo Português, Caminho, 2008, updated in this site in 2017).

Being an arrière-garde magazine, with a decadent and ‘saudosismo’ aesthetic (cf. article on the pre-Raphaelite Dante Rossetti in the second issue, by Tristão Dias de Aguiar), it has very poor and daring graphics, with only the emphasis on the huge "I" of the title, drawn in a stylized capitular in medieval taste (as well as the incipit of all poems). Literally, it is one of the magazines that prepare the presence, namely due to the list of names that passed through it. The chief figure in ‘Saudosismo’, Teixeira de Pascoaes, Afonso Lopes Vieira and Eugénio de Castro are three of his most recognizable collaborators, to which we must add the co-founders themselves.

Its first issue presents in the introductory text an explanation of the connection to the myth of Icarus in its title: "Singing in verses of an academic softness, we follow its maxims [of the Icaric flight] and our desire to reveal, to announce new forms of Dream and Beauty, the ancient imperfect and human yearning continues [...] inside us errs the longing for a greater, splendid and heroic life", so as to "ascend in Beauty, in Perfection and Pride" along the path of Art .