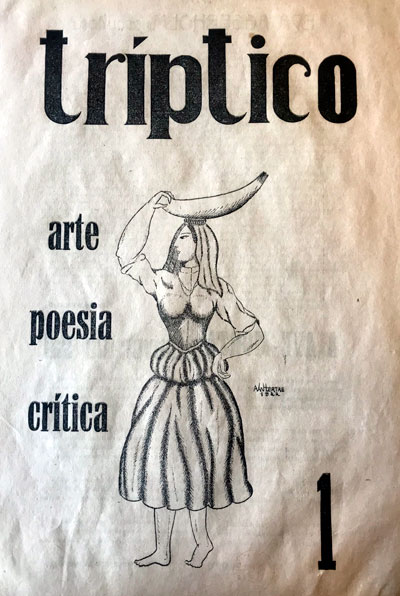 Tríptico is an essential magazine from the 1920s, the most avant-garde, from a graphic point of view, in Coimbra, and will last for nine issues, published between 1924 and 1925. Its subtitle "Arte, Poesia, Crítica" seems to explain the title, since ‘Triptych’ is related to the magazine's format: a sheet folded in three. There is a new series of the magazine starting at number 4, in November 1924. The magazine format starts to be smaller from here, decreasing to about two thirds of the original size.

Published around the time of Athena, its first issue dates from April 1924, while the Lisbon magazine only came out the following autumn. But it is with Contemporânea that Tríptico starts a dialogue in the very first issue, and in a way these three - together with Europa - are  arguibly the most striking magazines of the mid-1920s.

In this first issue, on page 2, there is a long article about the modernist sculptor Eva Aggerholm mentioning the sculpture "La Niña de la Cabellera Grande", which had already appeared in issue 8 of José Pacheko's Lisbon magazine (Feb. 1923), with praising to the Spanish painter Vásquez Díaz, one of the main foreign illustrators of Contemporânea, namely of “A Scena do Odio”, by Almada Negreiros (published in issue 7, Jan. 1923).

The second issue talks about other modernist magazines in Coimbra, namely Dionisos - who from 1925 would start a new and final series (until 1928) with one of the best modernist covers of those years, by José Cyrne - and Rajada (1912) whose four numbers had been precisely directed by the same director of Tríptico, the poet Afonso Duarte.

In the third issue, an hors-texte appears for the first time, which in the end is an offprint with several poems about São João (the bonfires of São João) glossed by its usual collaborators (Campos de Figueiredo, Tomás da Fonseca, Pascoaes...) . In the following issues, this sheet, separated from the set of tripartite sheets, will present images as diverse as a woodcut representing Anatole France (4), a drawing by Teles Machado alluding to Christmas (5) or an engraving by Milly Possoz with focus on the town of Sintra (6).

Also in this third issue, on page 6, and as a final piece of information, there is a note publicly saying that the magazine had received a series of manifestos from Marinetti, including a book entitled "Les mots en liberté futuriste". The magazine's position is democratic and surprising: "We are not futurists, but neither do we belong to the intolerant category. All men's ideas interest us." This connection between Marinetti and Coimbra, given by Tríptico, is curious, since a few months later, in 1925, a futuristic manifesto would be presented in that city by four students from the University of Coimbra, including Francisco Levita.

Speaking of other magazines, in number 6, by the way, there is still another tenuous relationship that can be established with Europa, already mentioned, namely when João Gaspar Simões speaks of the 1925 Autumn Salon at the Belas Artes de Lisboa, a decisive event for the modernist art in Portugal. Europa, in its first issue, dedicates several pages to the paintings of that event, namely the portrait of José Pacheko, director of Contemporânea. It's worth stopping here. Gaspar Simões says, on p.5, that he went with Diogo de Macedo to visit this salon and begins by praising not only his friend (about whom he had already written in number 4), but also that of the organizer, Eduardo Viana, then moving on to the "mystical sweetness" of Lino António as well as the "delicacy" of António Soares. After comparing the painter Milly Possoz with the Argentine Norah Borges (sister of Jorge Luis Borges) - in fact seconded by Almada Negreiros when he refers to Possoz as "the best draftsman of my time" - it is Almada Negreiros' turn to be characterized by his "fine intelligence." The article closes with a mention of the Salon's tribute to the three deceased painters of that new generation: Manuel Jardim (of which we know little today), Amadeo de Souza Cardoso and Santa Rita Pintor. The final words of the article are eloquent: "I end satisfied with myself, having seen the naive enthusiasm that led me this far to visit the Autumn Salon, having been rewarded [...]".

Tríptico is, in short, a magazine where aesthetic trends and cultural personalities of other Coimbra magazines converge, which will be decisive in the second phase of Modernism in Portugal, marked by the emergence of a presença, also in that city.